I started with this scarf in September 2015, following the free pattern by Purl Soho. As I couldn’t get the recommended yarn Lanecardate Feltro (Super Bulky weight) here in Germany (and ordering from the US is way too expensive for this – the yarn has been created exclusively for Purl Soho), I used the Merino Worsted by Malabrigo in colorway “Polar Morn” (quite fitting, isn’t it, for such a scarf ;)). This should become an ample shawl to keep me toasty warm on polar mornings!

As I wanted the same width of the scarf as in the pattern, at first I cast on 51 stitches instead of 31 because of the thinner yarn, which is then almost the width of the model scarf. 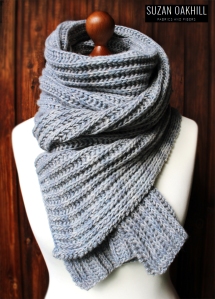 Fisherman’s Rib is easy to knit, though I’m still not sure if it counts as brioche… I believe there are several types of fisherman’s rib patterns and various ways of working these. But what they all have in common is the distinctive, thick plain-knitted ribs. However, they can differ in how comfortable they are to wear, how they feel and the weight.

I found out that there are actually two different popular methods for knitting in fisherman’s rib – either by doing a yarn-over and knitting together or by knitting into the lower ‘knit’ stitch. The second method is not so complicated (and used for this scarf) and the stitches slip from your needles without being interrupted by yarn-over. That is, you don’t knit into the stitch on the needle, but one row below. The stitch above is then more or less unraveled and forms a new loose stitch. Sounds complicated but is really easy:

The pattern is worked over a multiple of 2 + 1 stitches:

(Please see full pattern description at Purl Soho – I don’t want to steal their work by copying everything here :))

“Knit one below” (k1b) works like this: Insert the tip of the right needle into the stitch below the next stitch, knit normally (wrapping the yarn around the needle and pulling it back through the stitch below) and let the stitch above fall from the left needle.

There’s also a great video tutorial on how to “knit one below” (also by Purl Soho – I love this shop, though I’ve never been there. Such a great style, such gorgeous patterns!)

So once you get used to the rhythm of the stitches, the knitting is really easy – and the squishiness of the resulting fabric is so gorgeous I could squeeze it all day! ;)

Note: For those of you wanting to wet block this yarn as extensively as I did, keep in mind: the squishiness will be almost gone! After blocking the scarf became of course a little longer, but also much more “sloppy”. Next time I would probably rather live with shorter but more squishy shawl than a longer and thinner one. :)