I recently came across the article of Mika Kitahara in the W/S 2015 edition of the Amirisu magazine where she reported about her experiences with the “knitting culture” in Germany. Here’s a short excerpt:

“In my imagination, I would see people knitting socks with amazing speed on trains and buses, but in reality, I didn’t see anyone knitting on public transportation during my visit. So, knitting isn’t popular in Germany anymore? Where are the knitters?”

Good question. I decided to write a blog post about this topic, as I’m from Germany (Munich) myself, experiencing  exactly the same and having similar questions: 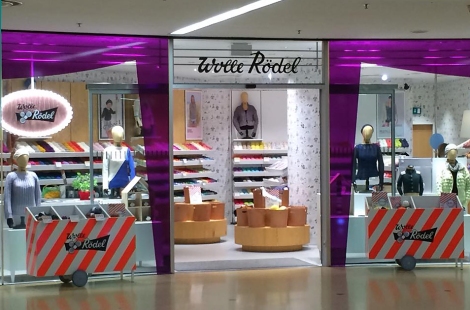 Is it the increasing perception of the public that only activities with a lot of action are worth to be recognized and maybe even to be posted on your Facebook profile (if you are into this at all, that is)? Why is running a marathon worth more than having the stamina to knit a sweater for 4 months? Is it because being an extrovert who is constantly on the run every weekend (I’m exaggerating now) is “how you have to be” these days and “slower” activities like knitting and for example creating a lace-pattern are just perceived… boring? But they need to do yoga to unwind from their busy, action-filled lives, yes? (I’m doing yoga myself, so don’t worry if I appear a little sarcastic now. ;))

On the other hand, a major building center in Germany called “Toom” advertises their products with “Respekt, wer’s selber macht!” (= Respect to those who do it themselves, like assembling a work bench or painting a wall). So… working at your house/garden and doing things yourself there is esteemed and respected, but knitting a sweater or hat for yourself or a loved one is… old-fashioned? I’m confused. 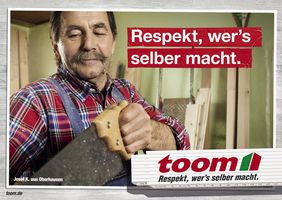 I recently “confessed” my growing dedication to the knitting and fiber scene/business to a (male, married) friend, and what did I earn? A surprised, but slightly disgusted look, accompanied by the admission that it’s certainly good for “relaxing”. Yes, it is, but why am I an outcast when I like to knit?

Another (female) friend not long ago said, as I showed her my recently hunted new skeins of MadelineTosh Merino Light, that I better shouldn’t confess my passion for knitting to anyone male when I first meet them when I want to “find a guy”. Pardon me!? Why are women perceived as boring and not sexy when they like knitting? Should we do a table dance while knitting to better serve our ever present duty to always be as sexy-beautiful-good-looking-dressed-up-alluring as possible? Sorry, getting emotional here, this is so stupid. Back to the facts.

On the other hand, articles like “Men’s knitting: Is it the ‘new yoga’?” (The Telegraph) with the subtitle “Increasing numbers of men are turning to what was once considered a women’s pastime to relax, finds Theo Merz” are shared 2,114 times after having been posted by the Vogue knitting page.

Men knitting? Yes, why not. Applause. And…. where’s the point?

Followed by essays like “Manly knitting: why more men should take up knitting” (The Collegiate). The author Michael Julien says:

“I believe this number should grow exponentially in the coming years. I knit because I find it to be a great stress reliever. When I am sitting down knitting away at whatever project I’m working on I feel like there is nothing to it and all of my worries just fade away.”

I cannot see many differences to my own experiences while knitting or doing anything which involves yarn. To be honest, I don’t really care if men are knitting or not. Of course there are still socially established (conservative) gender roles in our western societies as well, which lead to the perception that women are competent in everything which involves housework / kitchen / children / emotions (and – normally – knitting) while men do the “rough” work like chopping wood, checking the car and doing all the technical stuff like computers, TV and electrical installations. And those roles are not necessarily “bad” by itself in my opinion, responsibilities need to be divided if people are living together in a group (or partnership), but what really confuses me is the current… mixture of opinions and attitudes like: “women: cooking = good” but “women: knitting = boring” and “men: knitting = exciting”. At least in Germany.

A recent german statistical survey by the “Verbrauchs- und Medienanalyse (VuMA)” shows the following (depressing) pattern on how often people in Germany are knitting, crocheting or sewing in their free time (2010-2014, people in million, 14 years old and above):

Only approx. 1.9 mio people (of a 80+ mio population!) are crafting several times per week – compared to over 50 mio people who never craft anything! 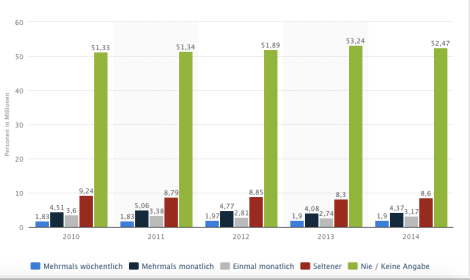 Though major german newspapers like the “Frankfurter Allgemeine” repeatedly report a “New trend: Germany is knitting again” and how so many local shops are popping up everywhere and offer courses, these figures show a different picture. The main explanation for this knitting revival is described as the return to more traditional values in a globalized and anonymized world, where people are increasingly producing “goods” like knowledge, ideas and services instead of “tangible” things. Which creates a vacuum for haptic products – things you can touch. Which I can fully confirm, that’s one of the causes I started knitting again as well, sitting at a computer every day, not really knowing what effect my work might have in the end, producing results you cannot touch with your fingers (except you touch the screen ;)). But I have to deny that I experience much of a knitting revival in Germany.

When we have a look at the infrastructure of all things related to knitting and other fiber arts (availability of yarn, distribution of shops, knitting events/groups, institutions which foster fiber arts like guilds or the National Needle Arts Association (TNNA) in the US, trade fairs…), Germany is a desert.

Though yarn is readily available in large cities like Munich, Hamburg or Berlin, it’s mostly cheap and low-quality yarn, made from acrylic blends (almost every big department store like “Kaufhof” or “Karstadt” has a corner with yarn, knitting and craft supplies). There are a few scattered unique, privately owned little shops which carry the high-quality (exotic!) brands like Artyarns, Madelinetosh etc., but the selection is limited (according to what the shop owner decided to order from the US) and you have to wait months for new deliveries.

The two main good quality brands you will find are Lana Grossa and Lang Yarns, but you won’t find them everywhere, on no! ;) Speaking for Munich, there are a few shops which carry them (not the department stores), but those often close early and are not open on Sundays or Saturday afternoons, so no way for a working woman to visit them except ordering online. I can recommend one shop though which is open 9.30am-8pm Mo-Sat: “Geknöpft und Zugenäht” (LUDWIG BECK, Kurzwaren & Wolle, Burgstraße 7, 80331 München), as part of the bigger store “Ludwig Beck am Rathauseck” which located directly at Marienplatz, the center of Munich. Their wool store is on the back of their building, but just go in there and ask for the entrance, it’s a bit hard to find.

They carry a decent selection of wool (mostly Lana Grossa and Lang, no international brands), haberdashery stuff, Addi products, buttons, ribbons, embroidery supplies, thread etc. Mostly the shop is bustling with people and the friendliness of the shop assistants depends on their mood, but if you don’t want to end up in front of closed doors (because of the limited opening hours of other shops) and want to have a proper selection of wool and yarn, go there.

There’s another chain of wool shops, called “Wolle Rödel” (their wool selection and where you can find them (branches), sorry, only in german), which also have some good yarn from above mentioned brands (in addition also Rico) and Knit Pro needles.

The mentioned few small, privately owned shops often offer a few courses and regular knitting groups, but I know of no big institutions like the US Knitting Guild Association (TKGA), mentioned TNNA, also from the US, or the various weaver and spinner guilds in the UK. There’s nothing here, no way to exchange experiences or get a list of wholesale distributors, get market news etc.

Maybe I’m wrong though, so if anyone in Germany knows of such institutions I would be most happy to hear of them. And don’t even ask about weaving and yarn dyeing knowledge and supplies. It’s a nightmare (and of course you can ask ;)). My personal way so far to gather knowledge of the market is registering on Ravelry, reading everything I could get from international markets (like the market report of TNNA), ordering many books in the UK, taking courses on Craftsy…

Hopefully the general perception and approach to needlearts in Germany will change in the future, but I see the main challenge in changing the public – society’s – perception: To perceive someone who knits not as old-fashioned, boring and tedious but as creative, fun-loving, enduring…?  As it seems to be common and normal in many other countries of the world.